Share on facebook
Share on twitter
Share on linkedin
Share on email
Sebring, FLORIDA – November 18, 2021 – Fresh from the WeatherTech IMSA season finale at Road Atlanta, the highly successful Molitor Racing team – MRS GT-Racing – are now making the journey south to Florida for the prestigious Hankook 24 Hours of Sebring. The event is part of the CREVENTIC Long Distance Racing Championship for GT and Touring cars held at the most beautiful venues around the world. This is top class motorsports, and the organizers are to be applauded for promoting such a great schedule in what has been another difficult year.
MRS GT- Racing are fielding three of their trademark high performance Porsche GT3s at the Florida event, which runs from November 19 through 21. The No. 987 car will be driven by the all-American team of Jeff Courtney, Alexander Marmureanu and Omar Balkissoon. The No. 989 car is being driven by Brazilian Raulino and Americans Jeronimo Guzman, Jody Miller, Pedro Torres and Robert Lorndale. Both cars are Porsche 911 GT3 Cup (992) cars, while the third car is numbered 990 and is a Porsche 911GT Cup (991 Gen II). No drivers have been announced yet for the 990 car but the team is expected to include recent top class driver and Porsche Carrera Cup Deutschland race winner Leon Koehler, who makes his Porsche Carrera Cup North America presented by the Cayman Islands debut in this weekend’s season-ending triple-header at Michelin Raceway Road Atlanta. The 22-year-old German, who finished third in the German single-make championship, joins MRS GT-Racing in its Pro class No. 14 Porsche 911 GT3 Cup car.
We spoke to MRS GT supremo Karsten Molitor this week ahead of the big event, “Directly after our season finale at the Petit Le Mans at Road Atlanta this week, we`ll move quickly to our next season highlight, the 24 hours of Sebring. “We are very proud to be part of this amazing event, which is organized by CREVENTIC, the specialist in endurance racing worldwide. MRS has been part of this 24-Hour program for 12 years, all starting with the 24 Hours of Dubai which has been a fixed part of the MRS program for a long time.”
About the weekend’s highlights he added, “At Sebring we´re going to compete with two 992 GT3 Cup cars and our driver line-ups are mostly set with US Drivers. We hope that the 992 Cup car will be as reliable as the 991. The track at Sebring demands a lot from both driver and car.”
Reflecting on the year and looking ahead Karsten went on, “This year was our first complete US season which has not been very easy for us. Nevertheless, we´re happy about what we have achieved and proud of it. We’ll continue our US Program and we’re very much looking forward to the 2022 season.”
Opened in 1950, Sebring International Raceway has played host to the Trans Am curtain raiser for some years now and is one of the oldest continuously operating race tracks in the United States. It consists of three tracks: the Full Circuit, the Short Circuit, and the Club Circuit. The full track itself is a seventeen-turn road course with long straights, several high-speed corners, and very technical slower corners. 3.74 miles long, many of the turns and points along the track are named for the early teams and drivers. Due to Florida’s flat nature, there is very little elevation change around the track and little camber on the surface, providing a challenging track for drivers, especially when it rains.
A total of 30 cars will be on the grid for the 24-hour spectacular with 13 entered in the GT3 Class. The schedule has had to be modified for logistical reasons meaning that the night test session now runs from 18:00 p.m. to 22:00 p.m. on Friday, November 19 for a maximum of 1.5 hours. Saturday, November 20 is all action for the MRS-GT team with private testing from 09:00 a.m. to 12:00 p.m., immediately followed by a 90-minute free practice session. Qualifying is from 14:00 p.m. to 14:30 p.m. with the race itself now starting at 17:00 p.m. on Saturday and running for the full 24 hours. The checkered flag is therefore at 17:00 p.m. on Sunday.
MRS GT Racing is a team with multiple European Porsche Cup wins – now competing in North America. Check out the Molitor Racing website at https://www.molitor-racing.de/ and there is terrific Molitor Racing Apparel available at https://molitor-racing.shop/de/. 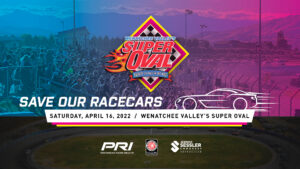 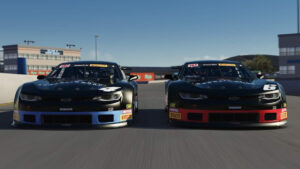 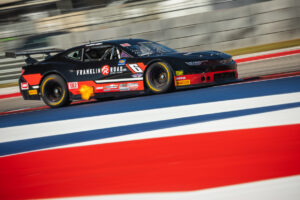 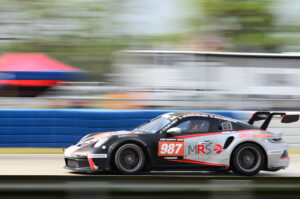